Nikolaeva I. A Historical Dictionary of Yukaghir 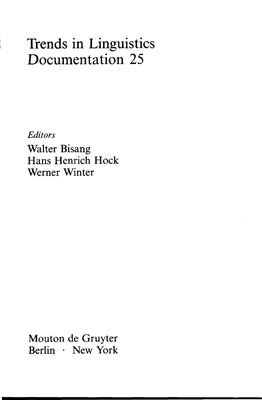 Yukaghir is spoken in the extreme North-East of Siberia. Several centuries ago there used to be several Yukaghir idioms, but by the end of the 19th century only two varieties had survived. They are referred to as Tundra (or Northe) Yukaghir and Kolyma (or Southe) Yukaghir. These languages exhibit fairly significant differences, especially in vocabulary. Although traditionally they have been termed dialects, some scholars prefer to view them as separate languages and speak about "a Yukaghir language family" rather than "the Yukaghir language" (Kurilov 2001; Maslova 2003). According to estimates from the late 1980s, Tundra Yukaghir is spoken fluently by about 150 people and Kolyma Yukaghir by about 50 people, but these numbers seem to be rapidly decreasing.
This book has two main purposes. First, it is intended as a relatively complete source of information on the Yukaghir lexicon. No comprehensive lexicographic description of Yukaghir is available for the inteational linguistic community. In addition to several relatively small glossaries (Veenker 1989; Endo 1997, 2001; Nyikolajeva 2000; Nikolaeva and ?alugin 2003; Maslova 2001, 2003), two major dictionaries have been published so far: Angere (1957) and Kurilov (2001). The former is based on Jochelson (1900) and mostly presents the data from Kolyma Yukaghir as spoken at the end of the 19th century. The transcription and morphological segmentation used in this dictionary are seriously flawed. Kurilov (2001), together with its shorter version Kurilov (1990), is a very rich collection of the mode Tundra Yukaghir lexicon, but it uses the Cyrillic transcription with Russian translations and copies are rare outside Russia. Most importantly, each of these sources only describes one Yukaghir idiom. In contrast, this dictionary presents the different varieties of Yukaghir in comparative format. The mode Tundra Yukaghir materials are taken from published sources, while the mode Kolyma data were obtained through my own fieldwork conducted in the 1980s-1990s. Although some lacunae are inevitable, the book presents the first fairly comprehensive lexicographic description of Kolyma Yukaghir. In this respect it can be viewed as an attempt to document the lexicon of this highly endangered language. The dictionary also contains earlier materials starting from the late 17th century, most of which reflect extinct varieties of Yukaghir.
Second, and most importantly, the dictionary provides a reconstruction of Proto-Yukaghir, which has not previously been attempted (but see Nikolaeva 1988). Proto-Yukaghir is understood as the common ancestor of all known Yukaghir varieties. Proto-Yukaghir stems are established based on inteal reconstruction and comparison between various Yukaghir idioms, as well as the exteal data. In some cases I cite possible cognates of Yukaghir stems from other languages, mainly Uralic and Altaic. Yet this dictionary is not etymological in the usual sense, i.e. it is not meant to provide etymologies for all Yukaghir words. Our present knowledge of the history of Yukaghir is insufficient for this purpose, but this dictionary may be a first step in this direction.
The Yukaghir family is usually classified as isolated, although its possible distant genetic relationship with Uralic has been much discussed (Collinder 1940, 1957, 1965; Bouda 1940; Angere 1956; Tailleur 1959b; Nikolaeva 1988; Fortescue 1998). There is no consensus on this matter, mainly because the history of Yukaghir has remained little known. Since in this volume Yukaghir forms are not only cited in their mode shape, but are reconstructed for the first time, my hope is that it will provide a foundation for future etymological work. The dictionary will assist scholars to establish the affiliation of Yukaghir and to reconstruct the ethnic and linguistic situation in prehistoric northe Asia, as well as to investigate the possibility of distant genetic relations between language families in general.
Похожие разделы
Смотрите также