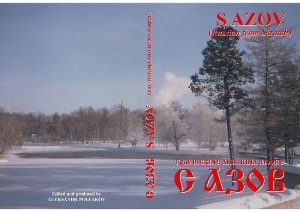 School of Hamanities, Languages and Sociences, University of Wolverhampton, - 2003. - 526 p.

The authors, Tom Dickins and Irina Moore, decided to write ‘S azov’ (Russian from Scratch) because of the lack of suitable communicative ab initio Russian language courses for more mature leaers. "S azov" has been used extensively with their own degree-level students, and has thus benefited from considerable testing in practical classroom situations. It is appropriate for a wide range of leaers, from school pupils with a background in foreign languages to evening-class students and undergraduates and postgraduates.

The textbook consists of an introductory chapter and twenty further chapters based on themes which exemplify and consolidate a series of new linguistic concepts. Particular emphasis is placed on the use of authentic up-to-date materials, such as advertisements, newspaper clippings, timetables, tickets, official forms and recent photographs, and on the creation of meaningful and relevant contexts for language leaing. Wherever possible, the students are asked to deduce unfamiliar syntactic and morphological principles for themselves from regular paradigms, before being required to apply the new rules or to cope with irregularities.

Each chapter begins with a summary of the competences which the students will acquire and with a list of the main points of grammar which are to be introduced. Roughly equal weighting is given to the four skills (speaking, reading, listening and writing), which are developed through a series of lexical and interactive activities, including memory games, crosswords, gap-filling tasks and role plays. Vocabulary glossaries are provided at the foot of each page, where necessary, and there is a comprehensive alphabetical Russian-English and English-Russian vocabulary list at the end of the course. There is also a grammar section at the end of each chapter, with more detailed explanations and grammatical exercises.

Introductions.
An object lesson.
Work / Nationality.
At the airport.
Shopping for food.
I can’t hear you very well!
At the hotel.
Russian cuisine.
Now and then.
Hobbies and interests.
Health.
Education.
My family and (other) animals.
The weather.
A horrible sight (or aspect? ).
In the town.
Bon voyage!
At home.
Personal information.
A further step in reading and writing.
Listening passages.
Vocabulary.
Похожие разделы
Смотрите также

385 pages. Published by Wiley Publishing, Inc. , Indianapolis, Indiana. 2006. Introductory course for readers who need basic Russian for business, school, or travel. Your fun and friendly guide to communicating in Russian. Whether you're a student, a traveler, or a businessperson, or if you just want to speak basic Russian, you'll find this book packed with practical lessons and handy references — including coverage of written Russian, a Russian-...

Русский для иностранцев. The New Penguin Russian Course is designed to provide students with an excellent command of basic Russian. Ideal as a self-tutor or as a supplement for those attending language classes, it aims to take the reader to the equivalent of A-level standard. The emphasis is on acquiring vocabulary, experiencing conversational language and learning useful grammar. The New Penguin Russian Course contains: - A key to all exercise...

Patrick G.Z. Roots of the Russian Language: An Elementary Guide to Wordbuilding

Учебное пособие Год выпуска: 1989 г. Издатель: Passport Books Язык курса: Английский Качество: Отсканированные страницы Кол-во страниц: 239 Designed to help students of Russian increase their knowledge of wordbuilding and, as a result, increase their vocabulary, "Roots of the Russian Language" includes 450 of the most commonly used roots of the Russian language. After mastering Russian prefixes and suffixes, students develop an ability to constr...

Say It Right in Russian

Colloquial Russian 2 is intended for students who, working on their own or with a teacher, have already completed a first-level course in Russian and want to continue their study.

After learning the Cyrillic alphabet, students of the Russian language are usually pleased to discover that, unlike English, Russian is a phonetic language—that is, words are almost always pronounced as they are spelled. Nonetheless, knowing the alphabet does not guarantee an acceptable Russian accent. The subtle differences, for example, between Russian vowels and their English counterparts can only be discerned by listening to Russian speakers....