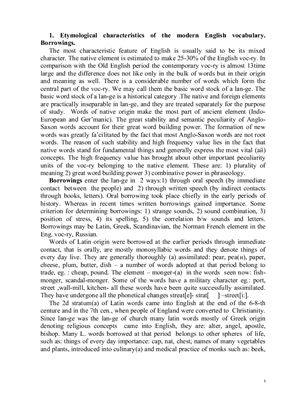 Список вопросов:
Etymological characteristics of the mode English vocabulary.
The lexical and grammatical meanings of the word. Types of lexical meanings and their classification. Polysemy in English and its cause.
Homonyms in English.
Synonyms in English.
Antonyms in English.
Phraseological units and their classification.
Problems of phonostylistics.
Main trends in the phoneme theory.
Functions of intonation.
The belles-lettres style. Theory of Functional Style.
Stylistic Differentiation of the English Vocabulary.
Languagc of the newspaper. Headlines and brief news items.
Figurative language. Metaphor and epithet. Simile.
Syntactical stylistic devices. Word order and completeness of the utterance.
Basic translation theories. Translation equivalence and equivalents.
Transformations in translation. Basic translation devices.
Britain of the middle 19th century as the leading industrial country in the world.
Forming of American nation. Ethnical and social structure of the population and its peculiarities at present time.
The Birth of the British State during the Tudors Dynasty. The Reformation.
Changes in the formation of plural forms of nouns.
The development of verbals in English.
The development of analytical tendencies in English.
Literature of the Renaissance. The background of Renaissance in England.
The works of William Shakespeare, the periodisation.
The Victorian novel in England. The works of Charles Dickens.
The phrase! Its definition. Types of phrases from the syntactical point of view.
Types of simple sentences. The problem of ellipsis in the simple two-member sentences.
The verb. The system of verbal categories. The category of tense and aspect.
Functional sentence perspective.
The noun. The category of case of nouns.
Types of subject. The problem of an impersonal, indefinite personal and the so-called formal subject.
Похожие разделы
Смотрите также