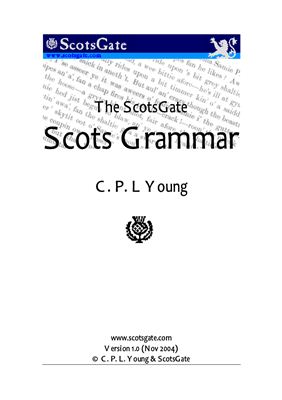 Index.
Introduction.
Articles.
A, the.
Verbs.
Present.
Present participle.
Simple past tense.
Past tense of irregular verbs.
Perfect tense.
Future tense.
Forming the negative.
Imperatives.
Auxiliary verbs.
Nouns.
Plurals.
Diminutives.
Quantifiers.
Compound nouns.
Possessive forms.
Pronouns.
Personal pronouns.
Possessives.
Reflexive pronouns.
Relative pronouns.
Interrogative pronouns.
Indefinite pronouns.
Adjectives.
Suffixes and prefixes.
Comparatives.
Demonstratives.
Distributives.
Possessives.
Compound adjectives.
Adverbs.
Prepositions.
Conjunctions.
Numbers.
Time.
Exclamations.
References and further reading.
Why study Scots grammar? .
Grammar is the glue that holds any language together and is made up of the rules that.
make our speech and writing comprehensible to others. Although native speakers of a.
language usually have an instinctive feel for these structures, leaers usually need.
some formal presentation. In the case of Scots, however, even fairly fluent native.
speakers are likely to be unaware of the language pattes they are using. It is only.
when these are written down can it be appreciated how rich Scots grammar is, how it.
differs often quite markedly from standard and colloquial English and how the forms.
used today often derive directly from older Scots usage. Given the status of Scots as a.
primarily oral tongue, there has been inevitable loss of distinct grammatical forms due.
to convergence with English, but what is really astonishing is how much remains.
Who defines Scots grammar? .
A short time ago anyone wanting to find out about Scots grammar had an uphill task.
Only two comprehensive grammars had been published; James Wilson’s largely.
forgotten study ‘Lowland Scotch’ based on interviews with inhabitants of the.
Perthshire village of Dunning, published in 1915 and William Grant and James Main.
Dixon’s 1921 classic ‘Manual of Mode Scots’ centred on the literary language. Both.
books had been out of print for decades. However recently there has been a.
comparative avalanche of Scots grammars. David Purves’ booklet ‘A Scots Grammar’.
was published in 1997; about the same time as Andy Eagle’s ‘Wir Ain Tung’,
essentially a reworking of Grant and Dixon, appeared on the web. Also in 1997 Philip.
Robinson produced the masterly ‘Ulster-Scots – a grammar of the traditional and.
spoken language’, again something of a homage to Grant and Dixon. These reference.
works were joined in 1999 by Susan Rennie’s ‘Grammar Broonie’, a workbook.
aimed at young leaers. As David Purves puts it ‘in any language revival, an.
essential stage is the fixing of standards amongst the welter of variation that is always.
found in the untended garden of natural speech’. Although there is no ‘official’.
definition of Scots grammar (there isn’t one for English either), these publications can.
at least be taken as a consensus of how experts believe the grammar of the Scots.
language functions.
What is Scots Grammar? .
A common root and many centuries of close contact between Scots and English have.
ensured that the grammars of the two tongues are broadly similar. This is good news.
for an (English speaking) leaer, but care still has to be taken, as there are many traps.
for the unwary. Despite the increasing number of publications, the grammar if Scots,
like its orthography and vocabulary can still be considered as being somewhat fluid.
Inevitably authors - including myself - are strongly influenced by local dialectical.
variations, so there are inconsistencies between the various accounts. This section.
aims to find the consensus and highlight some of the main points of difference with.
English. Some 'grammatical' terminology has been inevitable to give this document.
some structure, but I've tried to keep it to a minimum and explain what the terms.
mean.
Смотрите также

Alice Rose Gaby. A Grammar of Kuuk Thaayorre. Melbourne. 2006. 649 p. This thesis is a comprehensive description of Kuuk Thaayorre, a Paman language spoken on the west coast of Cape York Peninsula, Australia. On the basis of elicited data, narrative and semi-spontaneous conversation recorded between 2002 and 2005, this grammar details the phonetics and phonology, morphosyntax, lexical and constructional semantics and pragmatics of one of the few...

Grant W. , Dixon M.N. Manual of Modern Scots. - Cambridge University Press, 1921. - 500 p. The book is divided into three parts. Part I describes the sounds of Modern Scots with examples of their use written in the alphabet of the International Phonetic Association. Part II contrasts Scots Grammar with Standard English usage and gives copious illustrations from Modern Scottish Literature. Part III consists of a series of extracts from Modern Sc...

Shanghai, American Presbyterian Mission Press, 1892, - 53 p. There is as yet no grammar of the Manchu language in English. Wylie's translation of Tsing Wen Ki Mung (????), Shanghai, 1855, a kind of Manchu hand-book for the use for Chinese, though useful and full of interest, is by no means a grammar.

William McGregor. (1990). A Functional Grammar of Gooniyandi (Studies in Language Companion Series). This volume sets out to provide a comprehensive description of the grammar of Gooniyandi, a non-Pama-Nyungan language of the southern-central Kimberley region of Western Australia. It covers phonetics and phonology, word phrase and clause structure, and the semantics of closed-class grammatical items. The major focus is, however, on meaning: how...

Saltire Society, 2002. - 160 pages. English/Scottish Purves presents Scots as a separate language in its own right, resisting the often prevalent notion that Scots is merely a dialect of English, and gives a coherent overview of the distinctive grammatical and idiomatic usage of Scots. In this revised and extended edition of his controversial study, David Purves argues that Scots' lack of prestige is a direct consequence of Scotland's loss of...